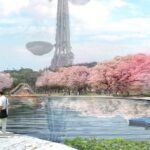 On 7th October, the result was unveiled of the two stages of an international competition for the International Gateway Park in Taichung. Taichung is the third largest city of the island of Taiwan.

The object of the competition was the preparation of a masterplan with the aim of transforming the former airport into a modern ecological park. The jury, consisting of three local Taiwanese and three international experts, has granted the team of Catherine Mosbach (lead) and Philippe Rahm Architects along with Ricky Liu & Associates Architects+Planners the first place.

A programmatic park, based on a masterplan approved last year, will replace the 254 acre former airport with an expected budget of 85 million dollars. The park will replace the old runway with a green oasis in the service of the four new functional districts and host the Taichung City Movie Centre, Taichung City Cultural Center and the Taiwan Tower.

The winning design is characterized by an landscape approach sensitive to geo-climatic characteristics of the place. The jury commented that West 8’s design is a park which “fully expresses Taichung’s diversified cultural landscape, creating for Taichung a new place charges with a festive ambience”.