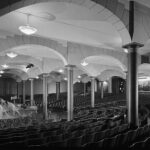 This evening Adriaan Geuze has the honor of giving a lecture on current work at the renowned Great Hall of The Cooper Union in New York. His lecture is part of the Fall Lecture Series 2008 of The Cooper Union for the Advancement of Science and Art, co-sponsored by the Architectural League of New York.

The Great Hall of The Cooper Union has stood for more than a century as a bastion of free speech and a witness to the flow of American History and ideas. When the hall opened in 1858 it quickly became a mecca for all interested in serious discussion and debate of the vital issues of the day.

To the Great Hall’s podium has come a pageant of famous Americans—rebels and reformers, poets and presidents. And, during the past century’s times of tremendous upheaval, it was through meetings in Cooper’s famous auditorium that the politics and legislation necessary to build a humane city took shape.

Geuze will go into recent and current projects of West 8, including the winning competition entry for designing the Governors Island Park and Great Promenade in New York.