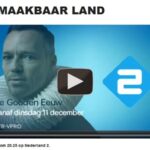 Adriaan Geuze can be seen in episode 6 of the ‘Golden Age’ series, on channel Nederland 2. Episode 6: A MAKABLE COUNTRY.

“God created the world, but the Dutch made ​​their own country.” There is no period in our history that this statement would be more applicable than on the Golden Age, the time when both prosperity and population of the Netherlands were rising than never before. The administration of Amsterdam had drawn two major expansion plans and in 1685, the commercial metropolis was four times larger than a century earlier. But what especially impresses us, is the form the new city got: not a maze of streets and alleys, but the pattern of three canals in the form of a semicircle, and there along rectangular blocks often with iconic buildings.

Equally symmetric with the canal district is the Beemster, the first of a series of large lakes that were drained to feed the population of the city. The merchants who financed the project, had laid out a perfect landscape of flawless straight ditches and roads. Along the villas where wealthy Amsterdam people spend their summer retreats, as the stench of the canals is unbearable. In this episode: we see how rich merchants of this water land has made a small paradise.