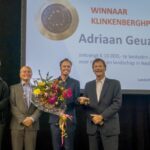 On Thursday, October 4, Adriaan Geuze received the Klinkenbergh Award from LandschappenNL. Geuze won the prize because of his vision and role for the development and preservation of the Dutch landscape. The award was presented to him at the annual Landscape Symposium at the Soesterberg airbase, owned by Utrechts Landschap.

Willem Ferwerda (Commonland) presented the Award as jury chairman and said: “Adriaan Geuze’s fascination for landscape, and certainly also for the Dutch landscape, is a source of inspiration for many. In a passionate way, he presents his ‘wake up calls’ about the current state of the landscape.”

The Klinkenbergh Award is named after Albert Klinkenbergh, founder and first chairman of the Union of Provincial Landscapes, the forerunner of LandschappenNL. The aim of the prize is to propagate the ideas of the Dutch Provincial Landscapes and their trusts for landscape management. These organizations all stand for landscape, nature, heritage and people and each of them proclaims a regional and local approach.

The annual Landscape Symposium was dedicated to the topic ‘The landscape of tomorrow’. Alongside Adriaan Geuze, Chief Government Architect Floris Alkemade, the Utrecht professor of Historical Geography Hans Renes, the Delft Professor of Area Development Co Verdaas and journalist/writer/walker Caspar Janssen gave their views on the changing Dutch landscape.