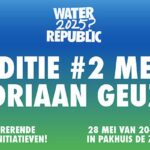 Amsterdam Pakhuis de Zwijger organises a a lecture series, titled Water Republic in 2025. This lecture program is an initiative by the Pakuis de Zwijger, together with Waternet, City of Amsterdam, The Young Creative Agency and Kees van Ruyven of Urban Development. Its aim is to build a sustainable water community in Amsterdam over the coming years towards 2025.

The Pakuis de Zwijger is currently engaged in developing a  hydrology map for Amsterdam, a city that just celebrated its 750 year anniversary. The map will be used to gather new ideas and visions for the future development of Amsterdam, a city whose structure has been strongly influenced by the passage of water.

Water also plays an important role in the work of West 8, “Water is in the DNA of a Dutchman” says Adriaan Geuze. The polder landscape with its beautiful vistas of water and light painted by the Dutch masters has always been an inspiration for Adriaan Geuze’s projects. “However, although the beautiful heritage of Holland is under threat, it does, however offer new opportunities for design. Water has a daily impact on our lives and must therefore play a role in the design of the space around us” remarks Adriaan.

Adriaan Geuze’s lecture, which shared his visions for water in 2025, took place on the 28th of May at the Pakhuis de Zwijger.