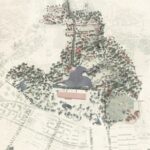 Adriaan Geuze to present at SNU

This weekend Adriaan Geuze will visit Seoul to partake in the official ceremony in which West 8 is officially announced as the winner of the International Competition for Master Plan of Yongsan Park, Korea. Also, during his visit to Korea, he will visit Seoul National University (SNU) on Friday 25 May where he will hold a lecture titled “Reframing”.

As part of the programme, organised by the SNU (Graduate School for Environmental Studies), His Excellency Paul Menkveld, ambassador of the Netherlands to South Korea, will hold a short introduction followed by the lecture by Adriaan Geuze. Afterwards there is a cocktail reception. The 3-6pm event has been organised by the university and is open to those interested. The venue is the Sochon International Conference Hall of the Graduate School of International Studies, Building #140.