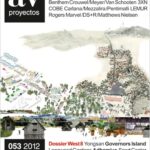 AV Proyectos Issue #53 titled “Dossier West 8” is in store now. To celebrate the 25th anniversary of West 8, AV Proyectos has an entire section focused on 8 recent projects by West 8 – to be realized projects such as the infamous Governors Island and Yongsan Park, and competition entries including Taichung Gateway Park and Tirana Master Plan invited competition. The detail segment allows you to take a closer look at Rotterdam Central Station, with photos and detail drawings which have not been disclosed elsewhere. Till now, AV Proyectos has issued only two other dossiers specially dedicated to individual firms; these were BIG and Foster.