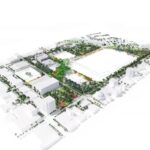 BIG and West 8, Fentress, JPA and developers Portman CMC unveiled their plan for the redevelopment of the 52-acre convention center in Miami Beach on 13th of May at a public meeting for the design competition. At the centerpiece of the plan is the Miami Beach Square, which will become the new civic heart of the district and a destination in the city.

Miami Beach is a unique city in so many ways. It is one of the youngest cities in America – and perhaps right now one of the most vibrant and dynamic. Its streetscape is characterized by a lively walkable urban fabric with a friendly human scaled environment under the cool shade of tropical trees and art deco canopies – except at the convention center. It is a dead black hole of asphalt in the heart of one the most beautiful and lively cities in America. Our mission is to bring Miami Beach back to the Convention Center – and to imagine an architecture and an urban space unique to the climate and culture of Miami Beach.

Nearly 50% of the site is open space at grade- open lawns, shady paths and plazas, parks and gardens that forms an archipelago of urban oases throughout the site. At the heart of it – we introduce a central square to become the pivoting point of the entire neighborhood. Becoming the front door to the convention center, and the convention hotel, a front lawn to the revitalized Jackie Gleason Theatre, a town square for the city hall, an outdoor arena for the Latin American Cultural Museum, and the red carpet for the big botanical ball room: the Miami Beach Square.

“We have devised a strategy that combines urban planning and landscape design to create a neighborhood characterized by human scale, pedestrian connections, shaded spaces with public oriented programs lining the streets and squares. A neighborhood that, depending on the season, the weekday, or even the time of day can be perceived as a lively downtown neighborhood or an inviting public park.” Bjarke Ingels, Creative Director BIG.

“We saw a once in a lifetime opportunity to create a public space here that is more than just a park that will be the new living room for the district and center piece of our public realm – Miami Beach Square. This space brings focus to the renovated Jackie Gleason Theater, the entrance of the convention center and for the first time ever creating a worthy civic presence to Miami Beach City Hall.” Jamie Maslyn Larson, West 8, Principal at West 8, the firm that created of Soundscape Park in Miami Beach.

The square creates a series of intuitive connections across the site – a diagonal that connects the Soundscape to the Botanical Gardens and Holocaust Memorial. A north-south connection joins the Collins Canal to Lincoln Road and naturally channels the flow of convention visitors to the liveliness of Lincoln Road. A green network of public spaces that stitches together all of the adjacent neighborhoods – formerly separated by the convention center – into a complete and coherent community – for both visitors and residents. All public programs – old and new come together on the square. All great cities have a great square – this will be Miami Beach Square.

While the Square is the center of the district, It is just a piece of an additional extensive network of diverse green spaces, totaling nearly 27 shady, friendly and usable acres and linked to the other great public spaces in Miami Beach.

By popular demand we have found a way to preserve and enhance the architecture and programming of the Jackie Gleason Theatre. By making it all public at the street level – opening up lobbies, restaurants and cafes on all sides – we make the Gleason a lively centerpiece in this new neighborhood. Towards the Square we propose to extend the fly tower with a performing arts center with various spaces for rehearsal and offering a visual connection to the public. Adjacent to the Jackie Gleason Theater sits the new Latin American Cultural Museum consisting of a base of public programs opening up on the square. The building form creates a covered shaded event space on the square blurring the transition between inside and outside.

Today the Miami Beach City Hall is almost like a left over wedged between random neighbors surrounded by traffic. Our proposal places it rightly in the middle of the town square with amble space for public expression and at the heart of communal life. The Miami Beach City Hall and Botanical Ballroom book end the Square making it a natural extension of the civic activities of city hall. To the north the botanical ballroom opens up allowing for beautiful views of the botanical gardens and the memorial. The Ballroom has an entrance to the south and to the north allowing for seamless connectivity to the convention center – under the shade and shelter of the canopies.

Rather than being the hermetic mono programmatic box that the Miami Beach Convention Center is today – a single program at the size of an urban block-  we propose to consider the Convention Center an actual urban block complete with different programs  – grown together to form a continuous architecture. A gradual transition from public to private – and from cultural to civic – conference to residential turns a stroll around the block into an experience of continuous variation. Along the entire west adjacent to the various gardens and the new square – the main entrances to the convention Center and Conference Center occupies the ground. The hotel lobby spans the entire south elevation in continuation of the Convention Center lobby. The Hotel façade as pulled back forming a cascade of terraces for the south facing hotel rooms – decreasing the perceived height seen from the Gleason.

The Roof of the Convention Center is framed by a green roof drawing the outline of the urban block – framing the hotel gardens and the roof parking interspersed with shade giving landscapes. As a reoccurring annual event we propose to sponsor an art foundation that will deliver a roof art piece to cover the remaining roof surface turning it into a giant ever changing canvas seen from the air as well as the roof terrace of the hotel. An ever changing giant canvas that will annually challenge contemporary artists with an architectural scale canvas – seen from the roofs and penthouses of adjacent buildings, from airplanes and google earth.

“Realizing that a challenge that seemed to be driven by two incompatible agendas was actually the opportunity – to create a convention center district that is not only for convention-goers but, more importantly, for residents.” Jack Portman, Portman Holdings and JPA. 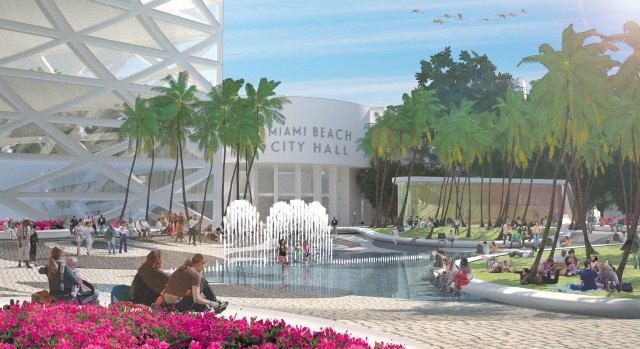 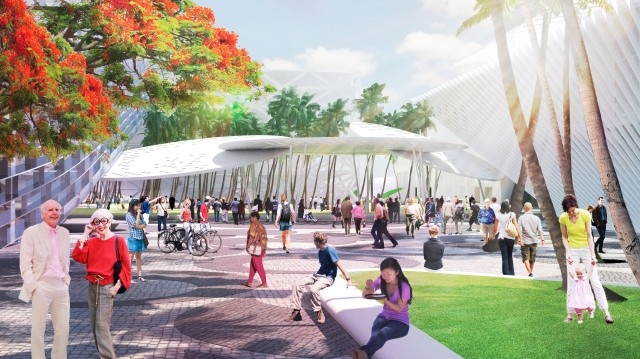 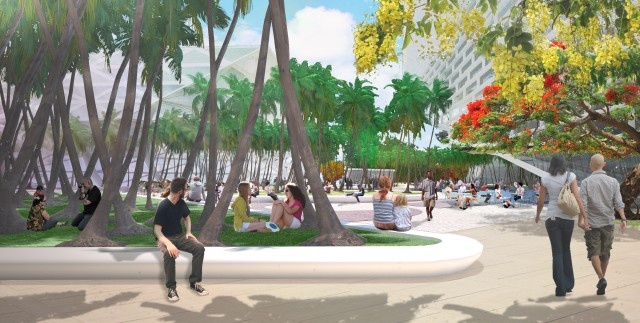