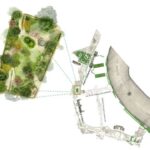 On Friday 23 of September, elected officials of the Bordeaux City Council, chaired by Alain Juppé, voted in support of the proposed revitalization of Place Gambetta, Bordeaux.

With the transformation of the city in recent years this once forgotten urban project, is destined to become an emblematic square in the heart of Bordeaux’s city center.

The renovation for the historic square project will be led by the Dutch-Bordeaux team, of West 8 + Sabine Haristoy + Cetab, whose winning competition proposal respects the proud heritage of the 18th century facades and natural elegance of this long standing English garden.

The project, called “Place-Jardin” or Garden Square, is the fruit of several years of consultation with local residents and businesses: Place Gambetta, surrounded by historic architecture will be restored and integrated into the city fabric once again. Situated within an improved pedestrian realm the square is envisaged as an iconic venue for downtown.

A quintessential 18th century English garden, Place Gambetta has always provided a welcome breath of fresh air and generous shade canopy for visitors and residents alike. However the arrival of the twentieth century created a separation between the garden and the urban fabric that surrounds it. Wide roads and heavy traffic overwhelmed the subtle narrative of the landscape.
Team West 8’s winning design vision centers on the notion of giving back the space to pedestrians. It reorganizes traffic to one side, improving accessibility and establishing a more urban atmosphere on the eastern periphery, which sees the garden embrace the rhythm of the street.

The eastern part of the square, as seen from rue Porte Dijeaux will be reserved for pedestrians. Bus and vehicular traffic will be diverted to the west. The idea is to maintain a garden inspired by the typology of English squares. It will be surrounded by limestone edging and feature a central fountain and natural meeting place dedicated to Eleonore D’aquitaine. The design also introduces a variety of new trees species to complement the existing trees, which are only partly preserved.

Several feasibility studies and ecological assessments are already underway, with renovation works slated to begin in 2018 for delivery in 2020. 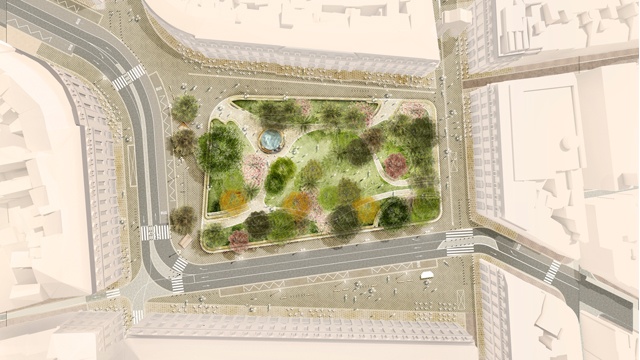 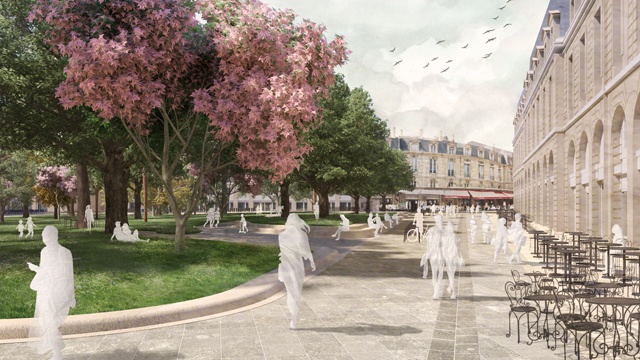 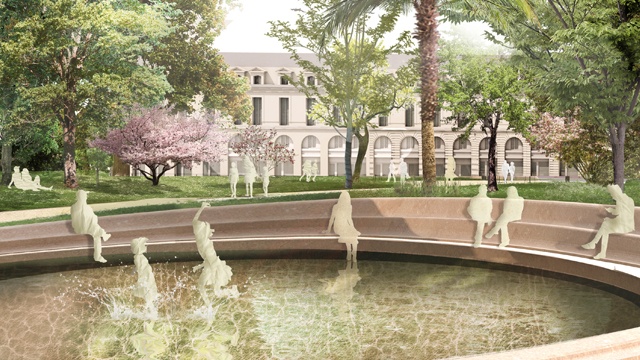 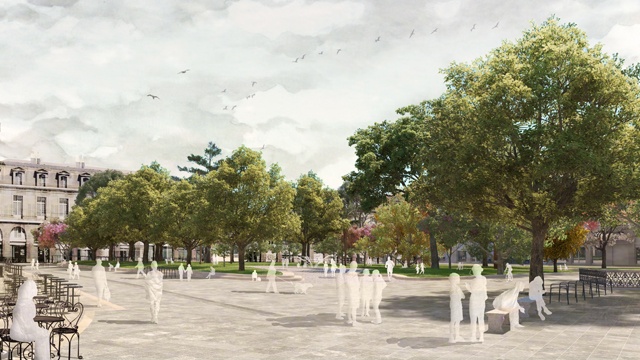