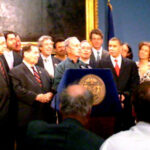 As a part of the announcement the City and the State together released the Governors Island Park and Public Space Master Plan, a comprehensive design for 87 acres of open green space, rejuvenating existing landscapes in the National Historic District, transforming the southern half of the island and creating a 2.2 mile Great Promenade along the waterfront.