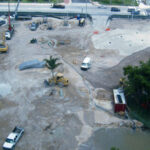 The first three of fifteen pergola structures were put in place the week of 13 September 2010. With the mid-sections also underway, the projects fabricators are well-underway to deliver the remaining elements on a weekly basis. Eliciting much discussion, curiosity and awe from passers-by, as well as consultants, owners and builders, sensuous pieces of architecture promise to set the stage for a new precedent in urban park design.

The projection tower footing was placed last week with anchor bolts the size of baseball bats. A new toilet structure has been designed for the park.

Lincoln Park continues to move rapidly toward a completion date for the New World Symphony’s Grand Opening in January 2011.