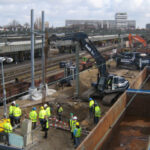 The past two years, the old Central Station has been demolished. The coming years the new roof of the passenger terminal and the tunnel underneath the tracks will be built. The new metro station has already been completed.

The new Rotterdam Central Station will connect train, metro and other forms of public transportation with each other and the design establishes the new station as a major hub in being a part of European transportation network. The new station should be ready early 2013.

In June 2004, Team CS, a collaboration of Benthem Crouwel Architekten, Meyer en Van Schooten Architecten, and West 8 urban design & landscape architecture, received the commission by ProRail and the City of Rotterdam to execute the vision presented for the new Rotterdam Central Station. West 8 is involved in the team as architects as well as urban designers and landscape architects.