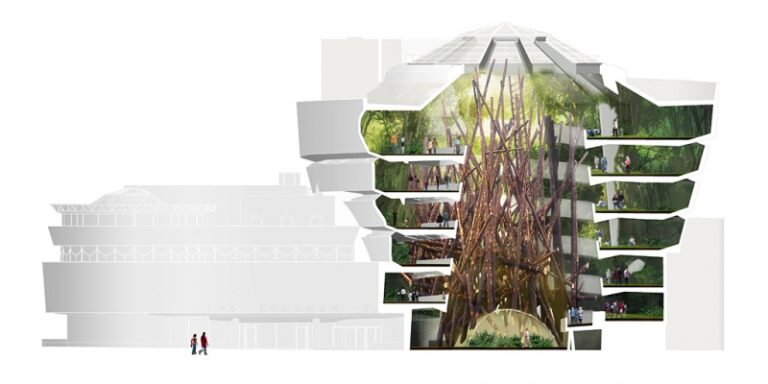 Contemplating the Void: Interventions in the Guggenheim Museum New York

“Since its opening in 1959, the Frank Lloyd Wright–designed Guggenheim building has served as an inspiration for invention, challenging artists and architects to react to its eccentric, organic design. The central void of the rotunda has elicited many unique responses over the years, which have been manifested in both site-specific solo shows and memorable exhibition designs. For the building’s 50th anniversary, the Guggenheim Museum invited West 8 and a variety of artists, architects, and designers to imagine their dream interventions in the space for the exhibition.

West 8’s submittal is based on the assertion that Frank Lloyd Wright’s Guggenheim Museum is the ultimate prototype of the sublime in modern architecture. Genuinely iconic, it is a harmonious resolution of material, geometry and space with performance and context. When completed it immediately became sterile, victimized by its own perfection: a sacred virgin in perpetuity. Would her perfection withstand the provocation of nature? Or is this perfection derived from her dialogue with the neutral Manhattan grid?

It is inevitable that the building should be confronted with the raw, chaotic vitality of nature. Will she keep her beauty, enhancing visitor’s experiences? This can be tested by importing a forest, a 1:1 scale mockup, consisting of two key elements: a mossy fern meadow stretching from the base to the top of the rotunda – a linear interior park, and 100 upended logs the height of the atrium. Visitors may respond appreciatively to light qualities, lovely fragrances and tactilities, or they may be critical: ‘Were the logs sustainably harvested? Will plants do well in such an environment?’ Until now, it appears that maximum adaptation has been be defined by curators’ efforts to minimize the impact of installations. Will the Guggenheim remain a sleeping beauty in a glass box, where nature cannot touch her?