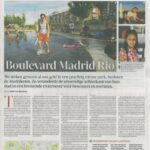 “The people of Madrid decided to put all their money into this beautiful new park, which transformed the shabby end of their town into a lively river bank for both residents and tourists alike.” Noël van Bemmel comments that, “This area used to be the dingy backside of Madrid, home to housing blocks for the underprivileged which bordered a busy and noisy highway, now the space has metamorphosed into the fresh face of the city.”

Van Bemmel describes the re-establishment of the dry river bed back into a real river as “impressive”. Fresh water continually flows on account of a series of water gates and pumping stations. “Along both sides of this new oasis, many city skaters and bikers can be seen enjoying the seemingly endless kilometers of green belt along the Manzanares River.

Families with children nestle down next to the clean water pools or under pine trees… There is almost no trace of the original M30 highway to be found anymore, only if you look closely, you may notice a number of filters cleverly incorporated into the hilly area where the children’s slides are located. These filters discreetly release air (which has been through a 5-step filtration process) from the underground tunnel which has 250,000 cars driving through it per hour. Not all tourists have discovered the city-beach and sleek design of the cafeteria yet.”

The transformation of this space into high quality public space has also catalyzed local’s enthusiasm for transforming both the cityscape and their own living environment. The river has become a showcase for the city. Urban planner, Jose Luis Infanzion is “happy that the previous mayor was strong enough to stop plans for shopping centers and office building becoming incorporated into the design.” Madrid RIO sets a new precedent for urban design that prioritizes quality public space over intense commercial development. “Now families with picnic baskets and excited toddlers in bathing suits emerge from the Lagazpi subway station, a former slaughterhouse, into a creative centre for exhibition, theatre and film.”