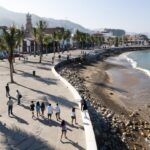 West 8’s El Malécon project wins the silver award for the Best Urban Design Project in the Mexican Republic. The highly acclaimed awards were presented on May the 17th by The Federation of Architects of the Mexican Republic (FCARM) during the 12th National Biennale of Mexican Architecture. The awards are granted to those projects which allow for a reflection on responsible contemporary architecture and sustainable design solutions which are recognised as important achievements in Mexican architecture.

El Malécon is a project which was completed in just 8 months by the collaboration between Estudio 3.14, Trama Arquitectos and West 8. The renewal of the kilometre long waterfront has allowed to re-establish its position as the social heart of Puerto Vallarta, as a paradigm which captures both the local and the contemporary character of this tourism location. In its transformation, it is to set an example for potential public design projects in Latin America. Being honoured with this award, the project is one step closer to accomplishing this task.

For more information regarding the awards, please refer to their website and the following article by Vallarta Opina.