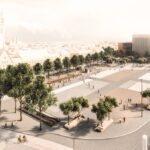 At over 8500 m² and hosting up to 220 events per year, ‘t Zand, is one of Bruges’ main squares. The redevelopment of ‘t Zand, designed by West 8 + Snoeck & Partners is also one of the largest public space projects for the city this year.

In June 2015, a jury selected Belgian-Dutch team West 8 + Snoeck & Partners together with Atelier Roland Jéol as the winning design team for the redevelopment of the square. Team West 8’s design fulfilled the city’s brief for a beautiful, bright and functional square that fits into the historical context of the city and simultaneously embraces the future by introducing a fresh and contemporary look.

Since then, the West 8 design team has been working in close collaboration with the city to refine the design and produce the final plan.

In July, a public exhibition of the five short-listed competition entries was held. West 8’s winning design was later given its own exhibition at the Concert Hall on ‘t Zand. During the expo, the public was invited to give feedback on the design. 147 suggestions were collected and these have subsequently been taken into consideration in the further elaboration of the plans.

Modifications to the competition design include revisions to the circulation of vehicular traffic in the area, accessibility improvements for pedestrians and cyclists, inclusion of play elements, utility updates, consideration for new trees, and the opening up the adjacent Rei Canal for public enjoyment.

A new book about the square has also been recently published. The book gives an overview of the history of ‘t Zand, the five designs that reached the second round of the competition, and a detailed explanation of Team West 8’s winning design. For more information on the design updates visit official website of Bruges (in Dutch). 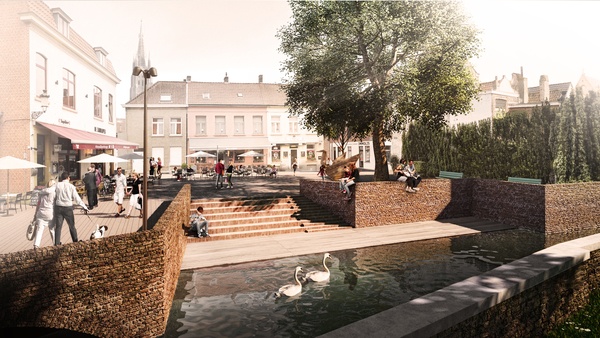