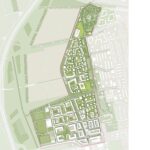 West 8’s Freiham North project in Munich, Germany and the Reconversion EAI, Former School of Infantry in Montpellier, France, are both presented at MIPIM – the leading real estate event for property professionals from the 11-14th of March 2014 in Cannes, France.

The conference which brings together the most influential players from all international property sectors, offers unrivalled access to the greatest number of development projects and sources of capital worldwide is the leading real estate event in Europe.

West 8’s master plan for Freiham North will be presented by the City of Munich at the annual MIPIM conference. Freiham North is the last substantial urban development to take place in Munich. Located on the western outskirts of the city, this attractive new district designed by West 8 for the City of Munich will accommodate around 20,000 people by the year 2040.

The urban design encompasses a unified network of green and open spaces along with two suburban train stations, several buses and a tram to the city center ensures the new district will be extremely well connected to Munich’s public transport network and the adjacent suburbs of Aubing and Neuaubing. Short distances and strong connections between living, working and leisure spaces will create a high standard of living for future residents. In Freiham, ecological urban development will be reconciled with the contemporary demands of the city.

Visit the new Freiham website and Freiham App (App only avaliable for download by Androids at present) designed by West 8 in collaboration with Pieter Hoen.

Team West 8’s winning urban design for the conversion of the former School of Infantry site (EAI) in the city of Montpellier will be presented by SAAM (Development Company of the city of Montpellier) at MIPIM. The design for this 35ha site emphasizes the rejuvenation of the pre-existing condition to subtly transform the site from one state to another, without upsetting the heritage.

Instead of building all of the proposed 4000 homes at once, Team West 8 proposed that the construction of 2300-3000 homes will be phased gradually over the next 15 years. The mixed housing typologies include: collective / individual and inter-generational, with one third of social housing and a third in helped accession. The design envisions a sustainable neighborhood (featuring soft travel, underground parking, water management and energy efficient buildings), with diverse architecture and an environmentally enhanced park.

To find out more about the project see: Reconversion EAI Former School of Infantry

For more information on the conference visit: MIPIM 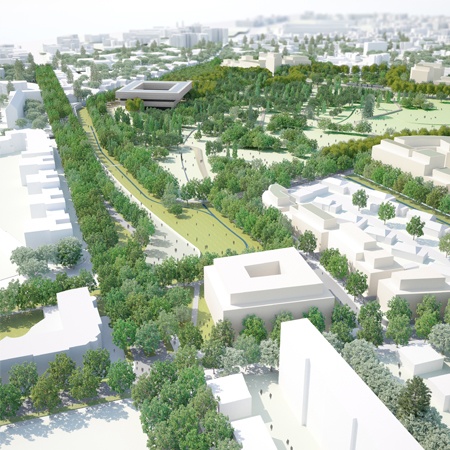