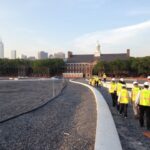 Very early on the morning of June 9th the largest non-historic building on Governors Island will be imploded with 200 pounds of dynamite to make way for the new West 8 designed public park spaces under construction.

Located on the Island’s southern end, building 887 is a 115 foot, 11-story brick building that was built in 1968 and has been vacant since 1996, and is no longer safe for use. Although the implosion will be streaming live, the best view, if you are in the vicinity will be from the Staten Island Ferry and the Battery in Manhattan.

The clearing of building 887 will enable the creation of 30 new acres of park and public spaces, including ball fields which will free the horizon for glorious vista of the Statue of Liberty. The debris from it and seven other non-historic buildings scheduled for demolition will be recycled and used within the park.

Also earlier in May the first of the Governors Island ‘Behind the Scenes’ tours began. Starting on the 25th of May the tours take a sneak peak at the construction of 30 acres of new park at the heart of Governors Island. Led by Trust for Governors Island and/or members of the West 8 design team the tours will take place on select afternoons throughout the summer season.

Highlights of the tour include Soissons Landing, the Island’s new welcoming green gateway and the South Battery, a new green space that encompasses one of the Island’s signature historic forts (formerly a 2 acre asphalt parking lot) both of which will be opened to the public later this year.

The first phase of this revitalization project is part of a multi-phase 87 acre Park and Public Space Plan led by West 8.

For more information: Behind the scenes hard hat tours