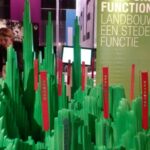 Tonight the 5th International Architectural Biënnale Rotterdam is set to officially open and West 8 is to participate in the exhibition ‘Making City’. This exhibition explores the making of tomorrow’s city and the role of the designer in this process. West 8’s construction showcases the distinctive landscape of the Dutch Metropolis. From the 20th of april onwards, the public can experience the installation at the NAi till the 12th of August.

The Netherlands has a Metropolitan structure unlike that of Paris, New York and London. Eleven million people live in a landscape in which cities and villages are embedded. In daily commuting between city centres, a landscape existing of polders, forests, hills and dunes is experienced. The landscape is within reach, even for those residing in a tenth floor apartment in the city centre.

Unfortunately, the system is under pressure and for the last decennia this particular nature is slowly eroding. Now is the moment to emphasise the importance of the experience of the landscape and to revalue her cultural-historical value.

In West 8’s project, a set of collective values which creates access and understanding to the citydweller, has literally been added and translated into a mountainous landscape. They represent the radical landscape which is unique to the Dutch Metropolis.

This installation has been developed parallel to the film “U Bent Nu Hier” by Popov Film. Both are commissioned by the Ministry for Infrastructure and Environment, and the Ministry of Economic Affairs, Landscape and Innovation with regards to the Green Blue Delta.

The exhibition will be on display at the NAi from 20th of April till the 12th of August, for more information, please refer to: www.nai.nl