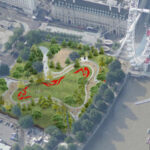 On 14 October 2010 an application for full planning permission and conservation area consent was lodged for the proposed re-landscaping of Jubilee Gardens.  Planning consent was previously granted in July 2006 however, the design were then not implemented due to funding constraints and restrictive covenants.

This new application is for a scheme which resembles the previous design although it has been simplified with the proposed topography being less marked and a number of elements of the previous scheme, notably a bridge and boundary retaining walls being omitted. The implementation of the park is due for completion in time for the Queen’s Diamond Jubilee and prior to the start of the 2012 London Olympic Games

The key elements of the 1,6ha park are its gently undulating lawns, the generous paths with distinct edges and the trees and flower beds. The park will be soft, green with light coloured pavements with meandering lines.   It is likely that due to the imminent Olympic Games, some to the soft landscape works will be phased but when fully developed, approx 100 trees will have been planted.

Jubilee Gardens’ name refers to the Queens Silver Jubilee (1977) but since the site was used as a compound for the construction of the Jubilee Line, the “Gardens” are not much more than a dilapidated lawn.

Jubilee Gardens are positioned along the Thames overlooking Westminster and Big Ben and are centrally positioned in the Southbank Cultural & Recreational precinct; in between The Southbank Centre and London Eye.  The area attracts in excess of 15million visitor annually.  The park is solely intended for recreational purposes, including passive and active recreation and play. No particular recreational use is precluded or prescribed and the new park will add further dimension to the palette of activities on offer on the South Bank.