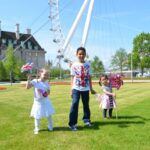 Jubilee Gardens is as of today officially open to the public

From a flat and featureless grass patch, it has been transformed into a park with lush green grass and chalk-white pavement. A truly Wimbledon-like feeling is about to overtake the observer. Striking flowerbeds evoke grand planting schemes reminiscent of traditional Royal Parks. This eye-catching landscape is to set an example to other parks in London. It has become a visual landmark allowing locals and tourists to relax and mingle, located amidst prominent tourism attractions.

The Jubilee garden was originally created in 1977 to mark the Silver Jubilee of Queen Elizabeth II, now nearing the Diamond Jubilee, it is only fitting the wide reaching grassland is transformed into a world-class park to celebrate her 60th year on the throne. The area has been redeveloped into a park, with meandering pathways and undulating lanes offering several viewpoints across the site and towards Westminster. Surrounded by typical English trees, such as the English Oaks, Common Beech and Bald Cypress, and amongst colourful flowerbeds, the garden will be a breathing space for the bustling city-dweller.

The £5m project was funded with contributions from Shell and the EDF Energy London Eye, secured under planning agreements with Lambeth Council, as well as £1.5m from the Mayor of London (via Transport for London) and contributions from several charitable trusts.

Boris Johnson, Mayor of London said: “The reinvigoration of this stretch of grassland into a welcoming oasis for visitors and Londoners is simply superb. It not only makes this part of the capital an even more pleasant place to work and live but also more attractive to business looking to locate in the capital.”