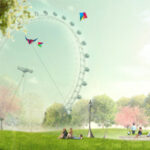 Jubilee Gardens is going ahead

West 8’s project Jubilee Gardens is going ahead and will screen live footage of the 2012 Olympics. The Mayor of London Boris Johnson has announced £11.5m funding to six London boroughs for public space projects that will transform the look and feel of the Capital in time for the 2012 Games.

Jubilee Gardens is situated on the iconic Southbank and forms part of Lambeth, one of the funded boroughs. Lambeth will get £1.5m to create a live site for the 2012 Games and a world-class park.

The project was chosen because it supports the aims of the Mayor of London’s Great Outdoors programme to improve public spaces in the Capital, as well as delivering improved public space and journeys under the Better Streets initiative. It also has demonstrable benefits for the 2012 Olympic Games.

The funding is part of TfL’s Local Implementation Plan (LIP) Major Schemes programme. Walking and cycle routes to Olympic sites will be upgraded, pedestrian crossings and access to stations will be improved and footways will be de-cluttered and in one case, a riverside park is being transformed into an attractive, accessible open space.

Mayor of London Boris Johnson, said: “When the world comes here during the 2012 Games we want the place to look its best and for people to have enjoyable journeys through the area. These great projects will help enhance the Capital as a whole, giving local communities and visitors improved public space, and providing a legacy for London that lasts for many years to come.”

Cllr Steve Reed, Leader of Lambeth Council, said: “Jubilee Gardens forms part of an iconic setting on the Southbank that is famous the world over and is visited by millions of people every year. The fact that this investment is coming in time for the 2012 Olympic and Paralympic Games and the Queen’s Jubilee is fantastic news. I’m delighted that our bid has been successful. It will help to turn Jubilee Gardens into a truly top quality public space that will include new trees, flower beds, lighting and a play area, helping to confirm the area’s reputation as one of London’s most popular public spaces.”

Ted Inman, Chief Executive of South Bank Employers’ Group, said: “On behalf of the Jubilee Gardens Steering Group, I wish to thank the Mayor and Transport for London for the funding which recognizes the need for the Jubilee Gardens to be made worthy of its prime location next to the London Eye and become a new green landmark for the capital. It will be intensively used by local residents and employees and by millions of visitors. Together with monies already secured, we now have a significant proportion of the overall budget and are determined to deliver this exciting project in time for The Queen’s Diamond Jubilee and London 2012.”

Alan Bishop, Chief Executive of Southbank Centre, said: “We are delighted in the Mayor’s vote of confidence. This will be a world-class park and a focal point for 2012. Just as important is the partnership between the landowners and the local community that will maintain the park to the high standard befitting the cultural centre of London.”