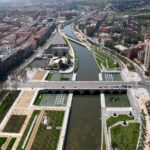 The ULI Urban Open Space Award recognizes vibrant parks and open spaces that have been transformative in promoting healthy, sustainable, and equitable outcomes in their communities. Projects are evaluated on their design, programming, community benefits, partnerships and funding, and demonstration value. This year, five projects were selected as finalists from among the 49 submissions from five countries, including West 8’s Madrid Rio Park, Madrid, Spain, and the other four finalists projects are:

The first ULI Urban Open Space Award was given to St. Louis’s Citygarden in 2011, recognizing the project for the relationship it incorporated among art, landscape, imaginative seating, and water features, which had universal appeal and created a new focal point for downtown St. Louis.

The announcement of the winning project will be made at the 2018 ULI Fall Meeting in Boston, October 8–11, and will be covered in the online magazine, urbanland.uli.org.