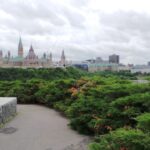 All four finalists’ designs for NEPEAN POINT DESIGN COMPETITION were unveiled on Thursday October 5 afternoon during a public viewing. A public survey is now available at the official website.

Nepean Point boasts one of the most spectacular outlooks in Canada’s Capital but lies disconnected from the city and rarely utilised. It has the potential to be a key destination within Ottawa. At the highest point of the site stands the iconic statue of Samuel de Champlain, who sailed up the Ottawa River in 1613. A two-stage international design competition was commenced by the National Capital Commission at the beginning of this year with the aim of redeveloping Nepean Point into a lively 21st century green space situated in the heart of the Capital.

Citizens of Ottawa are encouraged to express their opinion on all entries until midnight October 18, 2017.

After this public viewing process, the proposals will be reviewed by an independent jury, which will then recommend a proposal to the NCC Board of Directors in 2018. The winning design team and their concept will be announced in November 2017, as part of Canada’s 150th anniversary celebrations. The first phase of construction is planned for 2019–2020 and its total construction will worth CND $6.7 million.