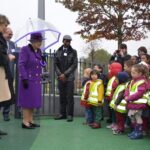 On 25th October, 2012, Her Majesty the Queen, Elizabeth II, visited Jubilee Gardens on London’s Southbank to officially open the new gardens and to mark the completion of the Garden’s transformation into a new green landmark for London.

To celebrate the official opening, Her Majesty the Queen unveiled a plaque commemorating her visit, mounted alongside panels showcasing the site’s history, and also re-displaying the plaque unveiled in 1977 to commemorate her first visit to the Gardens. The Gardens were first created in 1977 to celebrate her Silver Jubilee.

She was welcomed by Sir David Brewer, the lord lieutenant of Greater London, the Mayor and Mayoress of Lambeth, Kathy Hoey, MP, and Ted Inman, chair of the Jubilee Gardens Trust. Representatives of West 8 had the honour to meet Her Majesty the Queen.

From 10th September to 19th October, phase 2 of the construction took place. The garden was restored and enhanced after a busy summer with many high profile events having taken place, such as the Olympic Games, prime spot during the Queen’s Jubilee Pageant, Mayor’s Thames Festival and the Rain of Poems where 100.000 poems were dropped from a helicopter into the Gardens. Next to the 69 mature trees planted in May 2012, an additional 25 trees were planted and the flowerbeds were expanded with 60% to a total of 600 m2. Moreover, 12 high quality benches and signage detailing the history of the site have been placed in the Gardens. 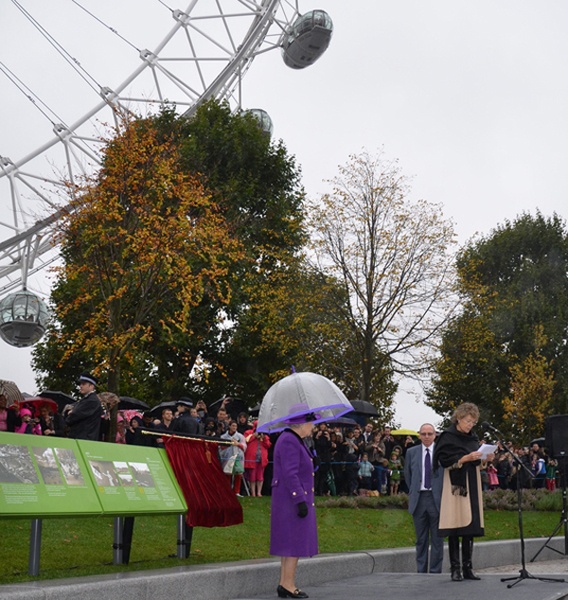