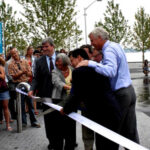 The first phase of Toronto’s Water’s Edge Promenade, which connects Sugar Beach and Sherbourne Common, is now open.  After only nine months of construction, the promenade and the seamlessly integrated Sugar Beach were officially inaugurated on August 9th, 2010 by Waterfront Toronto and its government partners, the Government of Canada, the Government of Ontario and the City of Toronto.

This formerly industrial area, which lacked public access to the lake, has been transformed into an uninterrupted walkway where pedestrians can stroll along a tree-lined allée by the lake. The 9.4 m wide granite promenade features a red and grey granite maple-leaf mosaic motif.  Custom cast aluminum benches and lighting add distinctive furnishings to the public realm.

In the future, as the East Bayfront community develops, the promenade will extend almost a full kilometre, all the way to the Parliament Slip. This is part of an overall vision for Toronto’s Central Waterfront designed by West8 + DTAH to establish a continuous water’s edge promenade across the downtown lakefront. It will be composed of two key parts: a 9.4-metre wide granite mosaic promenade and an 11-metre wide wooden boardwalk that will be slightly lower and built over the stormwater management system for the area.