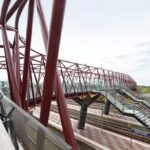 The nominations for the thirteenth edition of the Staalbouwwedstrijd 2012 (Steel construction contest) have been announced and the pedestrian bicycle bridge Aarschot by West 8 is a finalist in category D: Civil engineering and Art. On the 23rd of November, an award ceremony will take place at the Staalbouwdag 2012 at Sheraton Hotel/ Brussels Airport in Zaventhem.

The competition was open to steel constructions built between June 2010 and June 2012 in Belgium, and is organized by Infosteel in Belgium and Luxemburg which promotes the use of steel in construction.

West 8’s pedestrian bicycle bridge Aarschot across the rail tracks is an important connection in the regional bicycle network, connecting the old and new parts of the city. Likewise, the bridge offers new access to the rails. Its location, shape, structure and material use allow the bridge to capture the qualities of the surrounding landscape. Its steel space grid supported by sculptured pillars and its curved shape offers different vantage points and experiences, and is designed to both tempt and surprise its user.