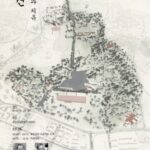 On November 24 2016, the final draft of the Masterplan of Yongsan Park designed by West 8 + IROJE + DONG IL will finally be presented to the Yongsan Park Committee, which consists of the Ministry of Land, Infrastructure and Transport, local experts and stakeholders. This milestone represents four years of progress since the team won the international design competition in 2012.

On the day following the committee presentation, West 8’s Adriaan Geuze and IROJE’s Seung Hyo Sang will participate in a public meeting at the main hall in the National Museum of Korea in Seoul, hosted by the Ministry of Land, Infrastructure and Transport. This podium discussion is organised for all citizens of South Korea and stakeholders of Yongsan Park. During the discussion, the progress on the updated masterplan will be explained in detail and citizens will be invited to raise questions and give suggestions.

In this way citizens can make a real contribution to their future Yongsan Park, a park design that aims to heal and recover the heart of Seoul city after many years of occupation by the US Army. That same afternoon, on November 25th a press-conference hosted by the Minister of Land, Infrastructure and Transport will officially announce the project updates nationwide