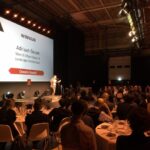 On 22 November 2018 Adriaan Geuze received the ARC18 Oeuvre Award from De Architect at the annual ARC Award Show in the Van Nelle Fabriek in Rotterdam. The prize was awarded to Geuze for his large oeuvre in the field of landscape architecture, urban design and architecture.

The jury, led by Robert Winkel (Mei architects and planners) acclaimed Geuze’s approach to urban inclusivity, his design craftmanship and his analytical observations. “He combines the artist’s gaze with the engineer’s vigor. Geuze has taught the Netherlands to look at its landscapes and to understand their importance for the quality of the urban and rural living environment.”

The jury also expressed their appreciation for Geuze’s educational activities. Geuze has been a Special Professor of Landscape Architecture at Wageningen University & Research since 2012.

Apart from Winkel the jury consisted of Bianca Seekles, Jarrik Ouburg and Harm Tilman. In his acceptance speech Geuze dedicated the prize to his office West 8.

Adriaan Geuze
Adriaan Geuze (1960, Dordrecht) is founder and partner of West 8, an award-winning international office for urban design and landscape architecture with offices in Rotterdam, New York and Belgium. Geuze is Special Professor of Landscape Architecture at Wageningen University and Research and is a member of the Society of Arts (a subdivision of the Royal Netherlands Academy of Arts and Sciences).

ARC Awards
The ARC Awards’ purpose is to celebrate the meaning and power of design and to promote it to a wide audience. Previous winners of the Oeuvre Award include Kees Christiaanse, Office Winhov, Riek Bakker and Thomas Rau.

The winners from all other categories of the ARC18 Awards can be found here.

West 8 is an award-winning international office for urban design and landscape architecture founded in 1987. Over the last 31 years West 8 has established itself as a leading practice with an international team of 70 architects, urban designers, landscape architects and industrial engineers. West 8 developed projects all over the world in places such as Copenhagen, London, Moscow, New York, Madrid, Toronto and Amsterdam. The office gained international recognition with projects such as Schouwburgplein in Rotterdam (NL), Borneo-Sporenburg in Amsterdam (NL), Jubilee Gardens in London (UK), Expo \’02 in Yverdon-les-Bains (CH) and Miami Beach SoundScape Park (US). Many of the projects are the result of groundbreaking entries in important international competitions. Recently won competitions include Toronto Waterfront in Toronto (CA), Governors Island in New York (USA) and Yongsan Park in Seoul (KR).