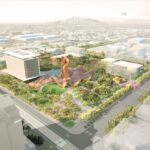 On Thursday 28th of August the final concept designs for Mesa City Center were presented to the public in a reveal event held in downtown Mesa, Arizona.

Three design teams- Colwell Shelor+West 8+Weddle Gilmore; Woods Bagot+ Surface Design;and Otak+ Mayer Reed– were selected to participate in a design competition process which kicked off in April of this year.  The unveiling of the designs marks the first step in the development of Mesa City Center into a distinctive place, which will capture and enhance the urbanizing momentum of Mesa’s downtown core.

The City Center project aims to create signature public spaces that accommodate programmed and passive uses, as well as being able to serve as event space.  City Center will bring more activity to the downtown core and serve as a catalyst for high intensity redevelopment with a variety of uses.  City Center will benefit the entire City and improve the quality of life for Mesa residents, businesses and visitors.

The reveal event will be the first step in the selection of the top design concept to be considered for further detailing and refinement. The design concept process is funded by the voter approved 2012 parks bond.

Additional information and event details can be found here.

Questions or comments on the project may be directed to Development and Sustainability Project Manager, Jeff McVay at (480) 644-5379 or jeff.mcvay@mesaaz.gov.

Colwell Shelor+West 8+Weddle Gilmore team’s Mesa City Center design combines the City and community’s wishes for a setting for its major events and festivals; a shady, green welcoming setting; and an iconic, world-class space. Conceived as a “town square with a twist,” the design makes City Center an events space that will be the City’s ‘green heart’ and catalyst for the next 100 years of urban growth in downtown Mesa.

The design features a central gathering space, the Events Plaza, which encompasses the centerpiece and icon of the project, a beautiful copper shade structure, called The Wind Dancer. The Mesa City Center design creates a destination that during different seasons, events, and times of day will feel like a lively downtown hub and an inviting public place.

Our design is not development-dependent to make it activated, can be built in one phase, can be built quickly and will cost the public less than a design that has multiple phases. This strategy will leverage City Center project in a way that is similar to the way other great cities have grown around great public spaces.