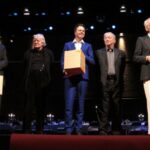 Festive Award Ceremony of Mondriaan Fund was held on 02 Feb at Stadsschouwburg, Amsterdam

Jury comments on Adriaan Geuze: “His analytical skills, investigative spirit and driving force has led to an interesting broadening of works with great impact on the profession. Together with West 8, Adriaan Geuze has become a significant and influential figure who leaves contemporary traces globally and keep optimistically working on a long list of impressive projects.”

The Mondrian Fund (previously BKVB, the Netherlands Foundation for Visual Arts, Design and Architecture) and the Stadsschouwburg (Municipal Theatre of Amsterdam) have organized an evening to draw attention to the prize winners.

After 20 years the Ministry of Education has recently decided that awarding these prizes will no longer be the function of the new Mondriaan fund, so this evening has drawn extra attention of the public.

Here is the link of the official news report of the Mondriaan Fonds about the ceremony: Fonds BKVB.

The entire jury report (in Dutch) regarding the Lifetime Achievement Awards for Adriaan Geuze can be downloaded here.