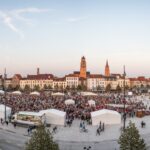 The thorough reconstruction of the new ‘t Zand Square and the Vrijdagmarkt is finally completed after two years of hard work. This UNESCO city of Bruges’ largest open place is now transformed into a beautiful, elegant and functional event square. The city of Bruges invited all residents and visitors to celebrate the completion of this brand new square at the grand opening on Saturday 01 September.

This festive opening was a big party for more than 10,000 citizens and visitors. It was featured with a full program of comedian shows, pop music, folk dance, street art and theatre performances and many more.

West 8 won the competition in 2015 to redesign this historic site. The plan significantly reduces vehicular traffic while still providing the necessary transport linkages and easy accessibility. A sense of enclosure is now enhanced by offering a renewed identity for the square, unearthing a full-fledged ‘Bruges’ character that draws on the rich historical, cultural and scenic layers of ‘t Zand.

The redesign focuses on embedding the iconic Concert Hall (Concertgebouw) in a more natural context. By adding double rows of Linden trees around the square, new intimacy is created, whilst still preserving the site’s open character. These trees provide a scenic corridor and functional zone for terraces and bicycles traffic.

The upgraded underground parking provides now also 650 new bicycles parking places aside from the increased numbers of car parking. The custom-designed seating blocks that intend to serve as resting places for visitors, turn out to be also a perfect pop-up podium for street performances in such evening. The new water patio at the historic canal staged this night also a pop-up cinema where a short film ‘In Bruges’ – the transformation of this new urban heart of Bruges – was shown.

A detailed booklet (in Dutch) documenting the design and process of the transformation of the new ‘t Zand Square can be found here.

West 8 is an award-winning international office for urban design and landscape architecture founded in 1987. Over the last 31 years West 8 has established itself as a leading practice with an international team of 70 architects, urban designers, landscape architects and industrial engineers. West 8 developed projects all over the world in places such as Copenhagen, London, Moscow, New York, Madrid, Toronto and Amsterdam. The office gained international recognition with projects such as Schouwburgplein in Rotterdam (NL), Borneo-Sporenburg in Amsterdam (NL), Jubilee Gardens in London (UK), Expo \’02 in Yverdon-les-Bains (CH) and Miami Beach SoundScape Park (US). Many of the projects are the result of groundbreaking entries in important international competitions. Recently won competitions include Toronto Waterfront in Toronto (CA), Governors Island in New York (USA) and Yongsan Park in Seoul (KR).