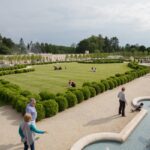 Pierre S. Du Pont (1870-1954), founder and designer of Longwood Gardens, was an innovator. He pioneered business, education, and engineering as a leader in business and philanthropy in the early 20th century. He built a legacy that is still honored today, particularly at Longwood. When he originally designed the site as his private estate, Du Pont gathered wide inspiration from his travels in the hope that his creation would be comparable to grand estates of Europe. In 1931, he brought to life an American Versailles: the Longwood Main Fountain Garden. The impressive technology, level of detail, and dramatic scale animated by water created a visceral experience.

Longwood Gardens opened to the public in 1946 and guests have been in awe of these fountains ever since, but as time passed the materials and infrastructure aged. In 2011, West 8 completed the first ever comprehensive master plan of the entire 1,077 acre site. Restoration of the 5 acre Main Fountain Garden was labeled the first priority. After eighty-three years of piecemeal repairs, the Main Fountain Garden closed in 2014 for a complete revitalization. The design team recognized an opportunity not just to restore the garden to its original glory, but to recalibrate it for the 21st century. A team of landscape designers from West 8, architects at Beyer Blinder Belle, and fountain designers at Fluidity Design Consultants set out to give the Main Fountain Garden a fresh start in the spirit of Pierre Du Pont; a spirit of innovation.

The New Main Fountain Garden retains its original style, but uses modern technologies to operate more efficiently and offer a better guest experience. The team began by removing all of the pieces–”peeling back” the surface elements–and excavating the fountain infrastructure. The pipes have been completely replaced and are now serviceable via an underground tunnel system, allowing for easier and less disruptive repairs, and they are complete with new precision jets that can send water 175 feet into the air and sync to lighting and music. This technology elevates the new fountain show experience to a present world-class standard. This revitalization will allow the Main Fountain Garden to age gracefully and remain cutting edge as technology advances.

New intervention is anchored by the original limestone, all four thousand pieces of which were completely restored or, if a piece was beyond repair, replaced by the original supplier in Italy. West 8 added new stone details, custom furniture, and a broader plant palette to enhance the public spaces of the Garden. The main focus of improving the guest experience, however, was increasing accessibility. West 8’s landscape designers connected all elements of the garden with cohesive circulation paths and made them all ADA accessible. Additionally, they restored or created new amenities of the Garden in a renaissance of the innovation and excitement of Du Pont. They incorporated a new grotto, trellis bridge, and seating areas and renovated the south wall of fountains, and the old pump house lobby.

The Main Fountain Garden made its comeback on this 2017 Memorial Day weekend. The grand premier of a new fountain show opened to a sold out crowd. Thousands attended to celebrate this new chapter in the rich history of Longwood Gardens. The weekend included fountain shows throughout the day and special illuminated performances at night to kick of the Summer of Spectacle series which will run until the end of September. The series will celebrate the Main Fountain Garden reopening with extended hours on Thursdays, Fridays, and Saturdays and special exhibits, fountain performances, and live music. This Fourth of July weekend was the next special date in the series. To see the full schedule of events, purchase tickets, or learn more about the history of Longwood Gardens, visit their website: www.longwoodgardens.org. West 8 looks forward to continuing collaboration on the Longwood Gardens Master Plan.