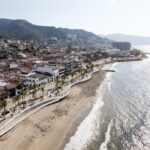 Puerto Vallarta, the backdrop of a great twentieth-century romance between Elizabeth Taylor and Richard Burton, is transformed. The picturesque town’s waterfront, the Malecón, has been redesigned by West 8 to enhance the cultural and economical position of the town. The town will be the setting of the Mexico Tourism Tianguis between the 25th and 28th of March. During this fair, several events will highlight the splendour of Malecón.

The Malecón project is one of the redevelopments following the strategic plan of the Municipality of Puerto Vallarta. West 8, in collaboration with Trama Architectos and Estudio 3.14, set out to transform the social heart of the city; a social heart which combines the local identity and its promise for the tourism industry, but which also became a place for tourists and locals to mingle. ‘The Moonlight effect’ is a very important factor in this transition. The new lightning strategy creates a friendly and romantic atmosphere inviting people to stroll leisurely over the boulevard both during the day and at night. Another important element of the Malecón is the ‘Mosaico Vallarta’. This mosaic includes two local traditions: the river stone pavement technique and a design inspired by a masterpiece of the prominent Huichol artist, Fidenzio Benitez. The design narrates the origin of Puerto Vallarta, thus bringing a local character to a contemporary boulevard.

The 37th edition of the Mexico Tourism Tianguis will be held in Puerto Vallarta and Riviera Nayarit, thus announced Secretary Gloria Guevara Manzo of the Federal Ministry of Tourism last February. The Tianguis is an annual event, held at different locations every year. It is a very important attribution to Municipality of Puerto Vallarta’s strategy that the government has selected the Tianguis to take place at Puerto Vallarta. The Tianguis is to showcase the renovation of the picturesque sea-side town, thus reinforcing their aim to create a prime attraction for tourism. While the main event will take place at the Puerto Vallarta Convention Centre, separate events are set to occur before and during the fair, including a Wine Fest and Restaurant Week. Malecón is to take the centrepiece on Monday eve March 26, where there will be a fireworks display over the Banderas Bay between 8 and 11pm, the renowned Mariachi Vargas will hold a concert at the boulevard, and a cocktail party open to the public will take place.

The uniqueness of Malecón’s location on the boundary between the mountain range and the sea, its story on how mountain meets sea, and its position as the social heart of Puerto Vallarta, have inspired the booklet “El Malecon de Puerto Vallarta: Murmulla de Sierra y Mar”; a booklet which was commissioned by the municipality. The booklet stresses the importance of Malecón and shows its promise for the future. It will be distributed amongst institutions of tourism for promotion, and will be sent to governmental institutes, such as municipalities and ministries. The new waterfront design is a showcase example highlighting the potential of public design in Latin America’s emerging countries by showing a discourse embracing the past, present and future identity of a place.

Notes to the editor: