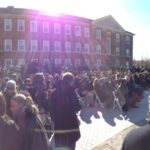 On Thursday 14 Nov, 2013,  New York City Mayor Michael R. Bloomberg planted the final tree of the new 30-acre park designed by West 8, marking the completion of the first phase of park on Governors Island. West 8 was selected in May 2007 after an international design competition.

“At the beginning of our Administration, Governors Island was little more than an abandoned and neglected green space with derelict buildings,” said Mayor Bloomberg. “Twelve years later, Governors Island has become a major attraction for New Yorkers and visitors, as its 172 acres continue to grow more dynamic, more resilient and more beautiful each day. Today marks another important step forward for the Island, and the 800,000th tree of our MillionTreesNYC program could not have a better home, where it will be part of this spectacular new park that will open next spring.”

The new 30 acres of park include Liggett Terrace, a sunny, six-acre plaza with seasonal plantings, seating, water features and public art; Hammock Grove, a ten-acre forested space that is home to 1,500 new trees, play areas and 50 hammocks; and the Play Lawn, 14 acres for play and relaxation that includes two natural turf ball fields sized for adult softball and Little League baseball. In addition, new welcome areas have been added at the Island’s ferry landings, as have key visitor amenities, including lighting, seating and signage throughout the Historic District. The Island and the new park spaces will open to the public in May of 2014.

Thursday morning’s tree planting ceremony drew a crowd of over 300 visitors, many of whom played a role in bringing the new park to life. After the ceremony, visitors were invited to explore the new park spaces and enjoy the brisk yet sunny November morning on Governors Island.

This past July, Mayor Bloomberg broke ground on The Hills, an additional 10 acres that are the culminating feature of the new Governors Island Park. Made of recycled construction and fill materials, The Hills will rise 25 to 80 feet above the Island, and the summit of the tallest Hill will provide visitors with a 360-degree panorama of the Statue of Liberty, New York Harbor and the Lower Manhattan skyline. The Hills are currently under construction with the goal of completion in 2015.