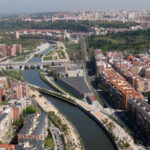 Rotterdam, 18 April 2011 – The city of Madrid has now its own waterfront, along the River Manzanares. Until recently, the river was squeezed in-between two four-lane highways. The construction of a 12 km tunnel provided new public space in the densely populated capital city. The infrastructural investment which totaled 3 billion Euros, added 150 hectares of open space to the heart of the city. The designer of the public space was selected through an international design competition in 2005. The Rotterdam based landscape architecture firm West 8, in collaboration with Madrid’s architects Mrio won the competition. Since then the implementation of the project has surged ahead. On Friday 15 April, the final part, the Arganzuela Park, was opened to the public. Thus, the largest new urban park in the world was completed in record time, with the total investment in public space of 400 million Euros.