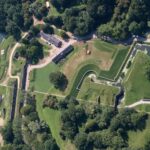 On Thursday the 8th of October, the National Waterline Museum opened its doors to the public. Mariëtte Pennarts, the cultural ambassador for the province of Utrecht said that the new museum and landscape design at the Fort bij Vechten “is an important, cultural highlight for 2015.”

The two hundred year old fortress is part of the New Dutch Waterline, an 85km long military defense line that was nominated for UNESCO World Heritage listing in 1995. Following the master plan designed by West 8 and Jonathan Penne Architects, the fortress was reinstated as National Waterline Museum. Architect, Anne Hotrop designed the new pavilion, which is a replica of the original bunkers located underneath the grassed structure of the fortress.

The Fort is an ingenious system of inundation zones, bastions and walled cities that was built in the nineteenth century. In wartime a 3,5km long strip of land could be flooded as a defense mechanism. After many years of neglect, the overgrown fortress became home to numerous rare and endangered plant and animal species. Today, various Dutch government bodies are in charge of carefully conserving, restoring and rejuvenating this magnificent part of the Dutch landscape. In 2006 the province of Utrecht commissioned West 8 and Rapp+Rapp Architects to help guide the process of rehabilitation at Fort bij Vechten.

The narrative intervention from the master plan is clearly visible, not only from the sky, but also from the roof of the fortresses. An 80m wide and 450m long band, which stretches across the site, has been restored to its original barren state circa 1880.

The sheer size of the fortress has been brought to the fore by an ‘at grade’, 1.5m wide entrance pathway which dissects the 6m high defense mounds. To reach the entrance of the new outdoor museum visitors are led across an elegant bridge crossing the canal and through a narrow cross section of the defense mound. It is an exciting route that eventually leads to a patio and the centerpiece of the museum’s collection: a 50m long model of the Waterline, that visitors can flood themselves.

This coming weekend, on October 10th and 11th, the fortress celebrates its opening with a series of festive activities and extended opening hours. Children can take a slide over the 75 meter long canal by a Tyrolean traverse and a local forester will show visitors the wildlife that lives on the roof of the fortress.

For more information on the opening weekend, click here.