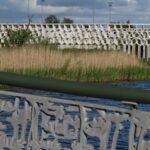 The Park Pergola at Máximapark has been chosen as a finalist by the selection committee for the Dutch Design Awards (DDA) in the subcategory, Spatial Design. The DDA committee 2013, selected West 8’s Park Pergola project from over 650 entries.

The Dutch Design Awards seek the best Dutch design within the Netherlands and across different disciplines each year. They are intended to work as a platform where developments in design can be reflected and acknowledged, a showcase of the best contemporary work in the country.

Parkpergola at Máximapark has been selected as one of the finalists in the Spatial Design, BEST EXTERIOR catergory. Centrally located in the Máxima Park in Leidsche Rijn – a design also by West 8 – the ‘Parkpergola’ marks the intimacy of the so-called inner courtyard. The pergola is a six-meter high concrete honeycomb structure that runs for a total length of 3.5 kilometres. The the selection committee comments: “the ecological Park Pergola has an apparent simplicity, but in fact, it is a complex object, which is also due to its size of 3.5 kilometres. The light falling on the long gate and the shadow patterns create multiple layers and beautiful spots in the park. The pergola marks and connects the division between the park and the outside world. The pergola does not stop at the object itself, but invites new variations and connections.” The other two finalists in the same category are ‘De Fundatie’ by Bierman Henket Architecten and ‘Hovenring’ by ipv Delft.

Several Dutch Design Awards are given away each year in the categories of Communication, Product and Spatial Design. There are also prizes for the audience favorite (Public Award) and significant work (BNO Piet Zwart Prize). An international jury will select the winners and announce them during the award show in October 2013.