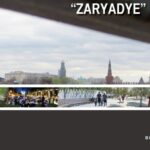 Press-Release: West 8 + BERNASKONI is selected for the international competition for Architecture and Landscaping Design Concept for Zaryadye Park, Moscow

As a result of an eight-hour long meeting on 17th June, the Jury selected six teams out of 90 international applications for the design competition Zaryadye Park, Moscow. Consortium West 8 + BERNASKONI is one of the three Rotterdam offices which enter the final. The other Rotterdam offices are MVRDV and MAXWAN.

The international competition for Architecture and Landscaping Design Concept for a site in the very heart of Moscow, Zaryadye, was announced on 19th April 2013. Zaryadye Park is located near the Red Square and the territory has remained abandoned for seven years. The competition aims to establish a park which would be the first contemporary park in Moscow since 1958.

In terms of its significance, the Zaryadye park project is without precedent. It is impossible to find a similar undeveloped site in the heart of any other global capital. This is why the Moscow city government has commissioned an international competition to develop the site. The park will project a new image of Moscow and Russia to the world. The jury panel consists of leading experts, among them — famous expert in the field of urban sociology Saskia Sassen, deputy mayor of Barcelona Antoni Vives i Tomas and Head of the Landscape Architecture Department at Harvard University Graduate school of Design Peter Walker. The competition contains 2 stages. The main evaluation criteria for stage one are the composition of the consortium, which shall consist of representatives from various specialties, and the consortium portfolio.

West 8 has formed a consortium with a young and successful local architect firm BERNASKONI for the competition.

The above 6 teams will enter the stage 2 of the competition and provide landscape and architectural concepts for Zaryadye park in September. After examination of technical expertise these projects will be presented to the Jury early November 2013. And later on the winner will be involved in implementation of the project.

The organizer of the competition has started a Facebook page and official website. For more information please see the following websites:

According to the organizer:

“The competition will rank among the most important architectural happenings of recent decades. It stands alongside the development of Ground Zero in New York, the reconstruction of the Reichstag in Berlin and the competition for a new cultural district in West Kowloon, Hong Kong.

The building of Zaryadye Park is a landmark initiative of the Moscow City Government. Moscow has had no new parks built since 1958. The only efforts since then have been focussed on maintaining an ever-decreasing number of green spaces. Zaryadye should become a principally new kind of park, a park for the 21st century — a role model project, showcasing the latest achievements, methods, materials and technologies in the field.”

West 8 is an award-winning international office for urban design and landscape architecture founded in 1987. Over the last 25 years West 8 has established itself as a leading practice with an international team of 70 architects, urban designers, landscape architects and industrial engineers. West 8 developed projects all over the world in places such as Copenhagen, London, Moscow, New York, Madrid, Toronto and Amsterdam. The office gained international recognition with projects such as Schouwburgplein in Rotterdam (NL), Borneo-Sporenburg in Amsterdam (NL), Chiswick Park in London (UK) and Expo ’02 in Yverdon-les-Bains (CH). Many of the projects are the result of groundbreaking entries in important international competitions. Recently won competitions include Toronto Waterfront in Toronto (CA), Governors Island in New York (USA), Playa de Palma in Mallorca (ES) and Yongsan Park in Seoul (KR).