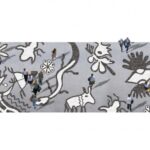 A joint venture of West 8, Trama Arquitectos and Estudio 3.14 design an urban renewal project for Vallarta’s iconic waterfront, locally known as the Malecón. This project has been carried out through the summer of 2011. By Thanksgiving of 2011, the work will reach its completion. This will mark a Renaissance for Vallarta’s historic district in a matter of just 5 months.

The initiator of this waterfront project is the mayor Salvador Gonzatez Reséndiz. He committed to an urban transformation with a rather inventive approach. The Town of Vallarta now holds an progressive and large-scale visionary strategic plan for the next twenty years, with a series of tourist destinations including the Malecón as the soul of the Historic District.

The West 8 design aims to project the Puerto Vallarta atmosphere, Mexico’s only beach destination set in a traditional village, into a new paradigm without losing its identity. It is conceived for the locals and tourists to mingle harmoniously with the romantic sunsets over the Pacific Ocean.

The public space scheme of the Malecon, uses a series of strategies to reintroduce the public realm to a human scale. The design provides comfortable shade in pedestrian areas accommodating inspiring view-lines to the ocean for visitors and residents. Innovative lighting has also been introduced to enhance the romantic moonlit effect.

The main feature of this unique place is the Mosaic paving, using the traditional local pebble-stone pavement technique. A native myth of creation, as narrated through drawings by the Jalisco born artist Fidencio Benitez, gave birth to the composition of the new mosaics pattern. The scale and challenge of the mosaics paving enhances the identity of local ethnicity and handcraftsmanship, two of the major attractions of Mexico, positioning Puerto Vallarta for a new era. These custom designs transform Malecón into a contemporary, vibrant and pedestrian-friendly public space.

Puerto Vallarta: it was the backdrop of a great twentieth-century romance between Elizabeth Taylor and Richard Burton.

Malecón This picturesque old town in the spot where the Sierra Madre lavishly covered with lush vegetation meets the Pacific Ocean inside a bay has gone through an urban renewal program for the last six years. The pinnacle of the town’s renewal is a total regenerated coastal line that combines functions of authentic local spirit for living, retail, leisure, and tourism.

The featured Mosaic paving: the Jalisco born artist Fidencio Benitez’s drawings. Fidencio Benitez is a native-Mexican belonging to the Huichol group who has for decades master the art of the silhouette. The original art-work will be exhibited in the City’s Museum when opened. A story-line where the Oceans meet the precious mountain (Sierra Madre) perceived under the influence and interpretations of their sacred cactus called peyote and other native rituals stands at the base of this demiurgic master piece. The pattern is crafted under supervision of a professional prominent craftsman Amador Gomez Piña.