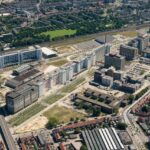 Submissions were rigorously assessed against a range of criteria, namely: durability, sublimation, sustainability, economy, innovation and social value. “We’re looking for real innovations” says sustainability juror Andy van den Dice. The Golden Phoenix is the only award in the Netherlands which is exclusively for the existing built environment.

West 8 designed the initial masterplan for the public private consortium, the key essence of which was to recycle the old buildings and to make Strijp S a multifunctional urban centre with vibrant contemporary culture and legacy architecture. Later West 8 went on to develop the design guidelines and public space plan.

Strijp S was praised for its “very gradual phasing, not only physically but also in duration. The crux of the project’s success lies in the good, comprehensive cooperation between the municipality and the commercial market, resulting in a flexible zoning.” Such an approach was made possible because Strijp S was one of the first projects to be notified in the Area Development Plans under the Crisis and Recovery Act.

West 8’s design for Park Strijp features a central esplanade at its core, the ‘Torenallee’ (tower alley), a sixty-meter wide urban axis that runs through the complex. The Torenallee functions as the new icon of public space for the city of Eindhoven. It is an esplanade of dense trees, public spaces, with unique street lighting and furniture, ornamental kiosks, and two sculptural buildings. At one end Torenallee connects perfectly to the city network and at the other it integrates seamlessly into the green park which defines the city’s edge. The allée offers the people of Eindhoven a ‘green route’ and a new city hub (sub-center) of meeting places, shops and various other recreational services.

The Torenallee also fronts the historical facades of three former Philips factory buildings, known as the Hoge Rug (high back). These monumental facades have been given a prominent space within the Park Strijp urban development plan. West 8’s design intent is bring the people back into the city by reconnecting the city with the historic Hoge Rug and beyond.

Parallel to Torenallee is the Kastanjelaan and the Philitelaan, two urban boulevards with wide profiles and a dense canopy of plane trees. High end residential development can now be found along these boulevards. Two triangle shaped urban spaces also designed by West 8 manifest along Philitelaan: a square surrounding The Ketelhuis (boilerhouse; a future restaurant) and a multi-purpose field at the start of the Hoge Rug displaying the chimney of the former glass factory and a war monument.

The very deliberate decision to limit the demolition of the existing building fabric created time to consider what the developments could bring and provided enormous opportunities for temporary use.

The Golden Phoenix judges were impressed by “Strijp-S, a new creative center for the city. With design, innovation and technology as a connecting factor between the High Tech Campus Eindhoven (technology) and the Technical University Eindhoven (knowledge).” Strijp S is a development which “has seen the light.”