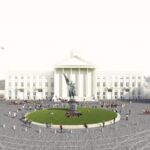 On the 9th of October, *Beliris awarded the contract for the redevelopment of the Place Royale to the consortium Grontmij, West 8 and Cerau. The Consortium’s proposal creates a welcoming and elegant pedestrian realm that enhances the architectural heritage of the Place Royale.

With its exceptional location and neoclassical facades, the Royal Palace built in the late 18th century is now poised to undergo extensive redevelopment. Beliris has selected the consortium Grontmij, West 8 and Cerau to undertake the re-design project, which is intended to highlight the architectural heritage of this unique place.

Grontmij, West 8 and Cerau’s proposal reconnects visitors to the Place Royale through the creation of new and improved pedestrian areas. The design allows visitors to admire the majestic facades that form a backdrop to the square. It reduces vehicular traffic thereby improving the residential quality of the square and creating a new place for people to rendezvous.

Improving access to the museums was another stipulation of the competition brief. Grontmij, West 8 and Cerau’s proposal creates a gateway to the Place Royale ‘the museum district of Brussels’, an area which hosts thousands of tourists every year. The redevelopment will have a major impact on tourism, inviting more visitors to enter the buildings and museums that surround the square.

The first phase of construction involves the sealing of the slab that lies above the Coudenberg archaeological site, the redevelopment of the square and the illumination of the facades.

The scope of works include an upgrade of the area to create a more extensive pedestrian area, a review of traffic flows, new tram tracks, improved street and facade lighting and the laying of new pavements complete with delicate blue stone detailing. All of which will be undertaken with a keen focus on sustainability and respect for heritage of the site, with materials to be re-used wherever possible.

Studies conducted by Beliris together with Grontmij+West 8+Cerau and in collaboration with Ginger CEBTP, APT Track Products and Measurements Devices, ACT Lighting Design, Urban Planning Studio Jean-Pierre Majot, Fenikx and SDesign should be completed late 2016 with construction scheduled to begin in 2017.

*Beliris is a public service institution in Brussels for visitors to Brussels. On a daily basis, Beliris undertakes construction, renovation and restoration projects within the realms of: mobility, housing, parks, neighbourhood revitalization, culture, heritage and sport. Beliris objective is to promote Brussels as a national and international capital.

West 8 is an award-winning international office for urban design and landscape architecture founded in 1987. Over the last 25 years West 8 has established itself as a leading practice with an international team of 70 architects, urban designers, landscape architects and industrial engineers. West 8 developed projects all over the world in places such as Copenhagen, London, Moscow, New York, Madrid, Toronto and Amsterdam. The office gained international recognition with projects such as Schouwburgplein in Rotterdam (NL), Borneo-Sporenburg in Amsterdam (NL), Jubilee Gardens in London (UK), Expo \’02 in Yverdon-les-Bains (CH) and Miami Beach SoundScape Park (US). Many of the projects are the result of groundbreaking entries in important international competitions. Recently won competitions include Toronto Waterfront in Toronto (CA), Governors Island in New York (USA) and West Kowloon Cultural District Park in Hong Kong (HK).