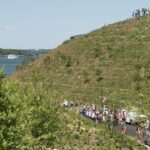 The Hills on Governors Island Officially Open to the Public

Designed by West 8 urban design & landscape architecture, the Hills are the culmination of the award-winning Governors Island Park and Public Space Master Plan, and Phase 1 of the Park and Public Space project. Rising 25 to 70 feet (8-21 meters) above the Island the Hills offer an extraordinary 360-degree panoramic experience of the New York Harbor.

“Over the past 13 years, Governors Island has been transformed from a relic few New Yorkers knew about and even fewer visited into one of the most popular parks in our city – or any city,” said Former Mayor Michael R. Bloomberg. “The Hills are an extraordinary addition to the island that will inspire New Yorkers and visitors for many generations to come – and they are a powerful testament to what can happen when public servants, architects and artists, and generous supporters all work together to bring a common vision to life.”

The opening of the Hills marks a major milestone in the transformation of Governors Island from an abandoned military base into an iconic destination for New Yorkers and visitors alike.

“Our Hills are the culmination of an eight-year collaboration with West 8 and the many New Yorkers and visitors who contributed ideas to this ambitious project,” said Leslie Koch, President of the Trust. “The Hills are a triumph of imagination, state-of-the-art engineering and smart design that will ensure access to beautiful green space, the waterfront and incomparable views of the
Harbor for years to come.”

As previously announced, the Hills are opening nearly a year ahead of schedule. The four Hills embody all that makes Governors Island unique:art, play, nature, relaxation, and views:
• Grassy Hill is a 26-foot high gentle, grassy slope overlooking the Island’s new and historic landscapes and the Manhattan skyline;
• Slide Hill, at 36 feet high, is the home of four slides, including the longest slide in New York City;
• Discovery Hill, also 39 feet high, features a site-specific sculpture Cabin by the internationally recognized British artist Rachel Whiteread and first major permanent public commission in the U.S.; and,
• Outlook Hill provides universally accessible paths and the Scramble, constructed out of reclaimed granite seawall blocks, to reach the Outlook. Here, 70 feet above the Island, visitors have unforgettable views of the New York Harbor, the Statue of Liberty and the skylines of Manhattan, Brooklyn and Jersey City.

Landscape Architecture of the Hills
The Hills are constructed of recycled demolition debris, general fill and lightweight pumice, stabilized with geotechnical reinforcement and covered with shrubs, trees and grassy lawns. While the Hills provide striking vistas and comfortable settings for relaxation and play, they also improve the island’s resilience in the face of increasingly dramatic weather patterns and rising sea levels.

“Sculpted topography works in concert with winding pathways and trees to create ‘conceal and reveal’ vistas, choreographing the park experience,” said West 8’s Design Director Adriaan Geuze. “It maximizes the sense of anticipation, pulling a visitor through the park or signaling a place to sit and stay just a bit longer. The topography defines the very character of the area.”

The Hills are home to more than 860 new trees and 41,000 new shrubs planted in new high-quality topsoil and protected from brackish groundwater by the new topography. The planting of each of the four hills is designed according to the micro-climates: varying degrees of slopes, exposure to sun, salty-spray, and prevailing wind and to accentuate key view corridors. The new lawns,
plantings and permeable paving also reduce erosion and storm run-off, while allowing for water collection and irrigation.

Art of the Hills
Discovery Hill is the setting for Cabin, a site-specific artwork by Turner-Prize winning British artist Rachel Whiteread. The work, curated by Tom Eccles of ArtCommissionsGI, is a concrete cast of a wooden New England-style shed reminiscent of Thoreau’s cabin at Walden Pond. Over time, the
surrounding vegetation on the hillside will grow along the sculpture’s surfaces, giving it a weathered look that blends into its natural surroundings.

The undulating aesthetic of the Hills is augmented by the smooth, curved edging which separates the green sections from the paved paths that wind through the park. A look down from the hilltops reveals striking patterns, distinct “petals” of green parkland outlined by the bright white concrete
edging. The edging, which ranges from curb to bench height, is ornamented with subtle designs that reference the marine life surrounding the island.

About the Governors Island Park
The Hills are the latest addition to the park. The first 30 acres opened to the public in 2014 include Liggett Terrace, a six-acre plaza with seasonal plantings, seating, food concessions and a hedge maze; Hammock Grove, a sunny ten-acre space that is home to 1,500 new trees, play areas and 50 hammocks; and the Play Lawn, 14 acres for play and relaxation that includes two natural turf ball fields sized for adult softball and Little League baseball. In addition, new welcome areas have been added at the Island’s ferry landings, as have key visitor amenities, including new lighting, seating, and signage by Pentagram throughout the Historic District.

Now that the Hills are open to the public, visitors are now able to walk or bike around the island’s entire 2.2-mile promenade and enjoy the popular Picnic Point. The southern portions of the promenade and Picnic Point had been closed since 2012.

The completion of the Hills has received widespread media acclaim including features in the New York Review of Books, The New York Times, Wallpaper, The New Yorker and Wired, among others.

About West 8
West 8 is an award-winning international office for urban design and landscape architecture, founded in 1987 with offices in Rotterdam, New York and Belgium. Over the last three decades West 8 has established itself as a leading practice with an international team of 70 architects, urban designers, landscape architects and industrial engineers. West 8’s New York office was established after winning an international design competition in 2007 for the design of Governors Island Park, today the office continues to work on high profile design projects across North America.

West 8 has developed projects all over the world, in places such as Copenhagen, London, Moscow, New York, Madrid, Toronto and Amsterdam. The office gained international recognition with projects such as Schouwburgplein in Rotterdam (NL), Borneo-Sporenburg in Amsterdam (NL), Jubilee Gardens in London (UK), Expo \’02 in Yverdon-les-Bains (CH) and Miami Beach SoundScape Park (US). Many of the projects are the result of groundbreaking entries in important international competitions. Recently won competitions include Toronto Waterfront in Toronto (CA), Governors Island in New York (USA) and Yongsan Park in Seoul (KR).