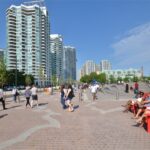 On the 13th of September 2017, Queens Quay Boulevard was awarded a Toronto Urban Design Award of Excellence. West 8 + DTAH’s design won in the category Large Spaces and/or Neighbourhood Designs.

The biennal awards programme acknowledges the significant contribution that architects, landscape architects, urban designers, artists, design students, and the city builders make to the look and livability of Toronto.

The awards in this category give special credit to efforts that make improvements to the public realm as downtown Toronto continues to densify and develop.

“Design set a new precedent for North American urban design”
In its report, the jury expresses its admiration: “The redesign of Queens Quay Boulevard clarifies the multiple modes of transportation that occupy the boulevard. Through a process of condensing and compressing the space used by car traffic, additional space is created for adjacent public and commercial functions, including a streetcar corridor, cycle lanes, and enlarged sidewalks.

The jury continues: “The distinct material palette associated with each mode of movement ensures the clear identity of each zone, and allows for the flattening of the pedestrian plane (via curb less edges) between the adjacent layers of movement. The design’s sensitive but robust details draw on a graphic iconography celebrating Canadian and nautical themes, resulting in an unusually coherent multi-layered urban realm. These are just a few aspects of this design that set a new precedent for North American urban design.”

A worldclass waterfront
Queens Quay Boulevard is a redevelopment sub-project of the 2006 award-winning Toronto Central Waterfront Master Plan. The redesign of Queens Quay was guided by sustainable transportation priorities which are manifested in the reduction of vehicular traffic from four to two lanes, introduction of a Light Rail Transit Corridor, widening of the pedestrian sidewalks and planting of 240 new trees along the boulevard. The enhancement of the sidewalks also considers interaction with the north side facades, fostering economic vitality. The space now provides a public realm that is both functional and beautiful; what was once a barrier is now a pedestrian and cyclist-friendly corridor and a grand destination. The designers also extended the Martin Goodman multi-use recreational trail through the site on the south side of the street. This worldclass waterfront design creates a sustainable civic space that honors, revitalizes and inspires the legacy of Toronto.