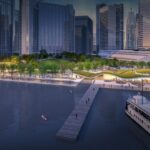 On Friday the 10th of April, Waterfront Toronto, in partnership with the City of Toronto today announced KPMB Architects / West 8 / Greenberg Consultants as the winner of the Innovative Design Competition for the Jack Layton Ferry Terminal and Harbour Square Park.

KPMB Architects / West 8 /Greenberg Consultants ‘Harbour Landing’ proposal was chosen after what Jury Chair, Donald Schmitt called an “intense and fascinating debate,” and will now be put to Waterfront Toronto’s board and the City for approval.

Mr. Schmitt said the design took home top honours as much for its practicality as its “iconic” design. “The Jury was impressed by the design balance achieved between a new heavily landscaped Civic Park, an elegant, iconic Ferry Terminal whose naturalistic form echoes the landscape topography and an overarching plan which makes strong connections to the emerging public realm of the waterfront” said Schmitt.

Frequently overcrowded in the summer, the current Ferry Terminal, built in 1972, is located at the foot of Yonge Street. The new vision for the area will result in a welcoming gateway to the Toronto Islands – one of the City’s most unique and cherished parks – with amenities and infrastructure to support the approximately 1.3 million visitors who use the ferry each year. The jury agreed that the winning proposal’s heavily planted and lush green space set it apart from the other designs and would help support the large number of visitors during peak times.

Jelle Therry, landscape architect and West 8 project leader, explained that the plan was imagined to allow the existing terminal to remain in place as the new one is built; “We have thought carefully all along about how this could be implemented while keeping the existing terminal alive and operating.” On a broader scale ‘’the transformation of the Jack Layton Ferry Terminal and Harbour Square Park will play an important role in the larger revitalization of the waterfront.” said Deputy Mayor Pam McConnell.

The design competition for the Ferry Terminal and Harbour Square Park was launched in the fall of 2014, with 33 design teams from 12 countries submitting initial proposals. Five design teams were then shortlisted to take part in an eight-week competition. Communication and engagement with the public was an integral part of the competition. With some 1,200 pieces of public feedback made on the five shortlisted designs.

The winning design by KPMB Architects / West 8 / Greenberg Consultants, which creates a new central feature and “landing” place where the city meets the lake will now be refined into a master plan for the area. Funding is in place for the first phase of construction, which is scheduled to begin in 2016.