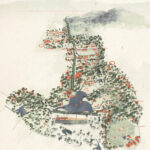 West 8 has won International Competition for Master Plan of Yongsan Park, Korea. On the 23 April, the organizer of the competition, the Ministry of Land, Transport and Maritime Affairs of the Republic of Korea announced the exciting news.

The project site is a large area in the centre of Seoul with a total area of circa 243 ha that has been in use as a military base for an extensive period both during the Japanese occupation and under post-War American protection. The vision of the competition, as described in the brief, is to create a park in which nature, culture, history and the future are in harmony. It will be a park which restores, sublimates, and expands upon the history and local characteristics of the area. This park shall regain the respect for nature and reclaims the lost and damaged ecological system. It will eventually become a park of new urban culture for the preservation of green spaces and a sustainable future.

The new Master Plan for Yongsan National Park proposed by West 8 + IROJE has been developed through an interactive process that has consistently returned to the fundamental concept of healing. The act of healing is a process that transforms the existing site through an awareness of its history into a world-class park that inspires illusions of nature, ecological restoration and a wide ranging urban park culture.

The act of healing is developed on three fundamental levels in the transformation of the site:

In Korean culture, the Korean peninsula is described with the phrase “Sam Cheon Li Geum Su Gang San”; which means ‘1,200 km of mountain and river linked all together is embroidered in gold’. This has been the way Korean people see, meet, and interact with beautiful mountains and rivers. It is part of the collective perception towards the physical world. It describes the Korean mental DNA. As such, we not only recover the forgotten landscape in the military base but also recover the illusion of Korean landscape mentally, visually and ecologically. This central part of the site will be excavated for a lake. The spoils will be used to create a more dramatic topography, to build an illusion of naturalistic Korean landscape. From this topography a new restructured water system with streams, ponds, marchland and lotus basins will be introduced. Natural woodland and undulating meadows will be organized around the lake.

The location of Yongsan Park symbolizes an extremely turbulent history of war and occupation. However sad and sorrowful this history may be, it is still part of Korea’s history. The approach for the park design on the site is to uncover the traces and layers of the history by reusing many of the existing buildings and roadways. The architectural approach is respectful towards the military buildings on the site and ranges from 100% restoration (such as the Japanese Garrison) to the construction of new buildings on the footprint of demolished ones. Also, new additions are added to existing buildings to make them fit for their new use. Where buildings disappear, their footprint re-emerges as a trace of history. These places, we named ‘Madang’. The Madang is the ancient Korean word describing an open plaza that can hold various programs. The Madangs are simple granite stone platforms in the undulating park landscape. They are considered new, informal meeting point for social activity.

For over 100 years the Yongsan site has been cut off from the city by a secured wall. The departure of the US army gives the city a unique opportunity to reclaim the excavation and to colonize it. The new Yongsan Park will transform the adjacent urban fabric and works as a magnetic field for urban growth. The interface between the park and the city is diverse and versatile. Within and around the park at least 10 different types of relationships are identified: walled gardens, river links, night life districts, new residential neighborhood etc. Heavy traffic corridors appear to obstruct the connection to the city. Therefore a dozen of pedestrian bridges will create iconic gateways to the park. These ritualize the entering to the park. North-South a robust green-blue ecological Spine will restore the connection between Nam San and the River Han. Programmatic diversity, food, bicycle culture and social media are prominent in the master plan strategy. For the realization of the park public participation and soil remediation is the key. This will be an open process of healing, seeding and growing.

Landscape architect WEST 8 in Rotterdam, together with local architect IROJE architects & partners, Prof. Kim, Nam-choon, botanist and professor of Dankook University, Prof. Kim, Bong-ryol, Professor of Korean Architectural History at National University of Arts, and DONG IL Engineering Consultants Co., Ltd. are now given the chance to lead the design development of the Master Plan for the creation and structuring of the park. The construction of the park is scheduled to start in 2017 after the evacuation of the American military base from the project site.

The jury believes that “this project can evolve and adapt in response to the expertise of the local community and deeper cultural values,” as Christophe Girot, the selection jury chairman, said in a statement.

An award ceremony will take place at the National Museum of Korea on the 25th of May, 2012.