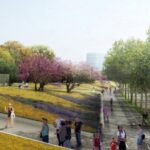 Rotterdam, 23 June 2011 – West 8 has won the Segrera Linear Park design competition in Barcelona. West 8 collaborated on this occasion with RCR and AldayJover.

The winning entry, titled Camí Comtal, provides relief to the bustling city of Cerdá, introducing a new green slow route to counter today’s urban frenzy and activity, represented by the (other) Diagonal Avenue.

The new green corridor, four kilometer long, extending from the city’s fringe deep into the heart of the centre is the successful result of the tunneling of the new Very fast Train route from France to Barcelona Sagrera/Sans. The urban precincts on either side of the route which used to be separated by railway yards are now linked by a series of parks.