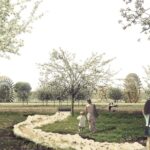 West 8 in collaboration with Boyer-Percheron-Assus and Merlin wins competition for park design and transformation of former military terrain in Montpellier, France

On the 10th of July Hélène Mandroux, Mayor of Montpellier announced that West 8 in collaboration with Montpellier architects, Boyer-Percheron-Assus and Merlin, is the winner of the urban design competition for the conversion of the former School of Infantry site (EAI) (35 ha) in the city of Montpellier. Team West 8 beat fellow competitors BIG Agency and Bau-B. West 8’s proposal emphasizes rejuvenation of the pre-existing condition to “subtly transform the site from one state to another, without upsetting the heritage” explains Michaël Delafosse, Deputy Major and urbanism delegate. The proposed redevelopment of the EAI into a new district will be presented to the public in September. Development of the neighborhood will be led by Thierry Laget from SAAM (Development Company of the city of Montpellier).

In 2010, the troops of the EAI retreated from their city base. While this created considerable economic trauma for the city, over a thousand jobs were lost, it also became a great opportunity to redesign 35 hectares of open space in an otherwise dense urban sector, located less than a mile from the historic center of Montpellier.

The City of Montpellier identified four key ideas for the development of future district:

Instead of building all of the proposed 4000 homes at once, Team West 8 proposed that the construction of only 2300-3000 homes should be phased gradually over the next 15 years. The mixed housing typologies include: collective / individual and inter-generational, with one third of social housing and a third in helped accession, says the City. Density is relatively low: “the development has more of a suburban spirit as opposed to the typical vertical density of Port Marianne”, explains Michaël Delafosse. It will feature around 30,000 m2 of shops and local services, as well a creative and cultural centre (containing a cinema, design, architecture and marketing companies from the creative sector) which will hopefully generate a thousand jobs. Notable architecture in this development includes the 7000 m2 future City of Music and the Arts building, the Graduate School of Journalism (antenna ESJ Lille) and Crous, student housing.

Unlike traditional urban design competitions which rely heavily on a pre-selected jury, the Development Company of the Cityof Montpellier (SAAM) chose to incorporate an original mode of citizen consultation into their selection process.

Developed by the Res Publica agency, this approach seeks to involve all segments of the city’s population, by drawing on electoral lists. All residents were invited to the consultation phase. A personalized letter was sent to 10,500 people, who were randomly selected from the electoral lists, (addition weighting was given to people under 40, who are traditionally more difficult to mobilize). Communication was made with people who participated in the public meetings, the voluntary sector at the municipal level (beyond the neighborhood associations): environment, culture, travel etc and even involved the younger generation (from 12 to 25) through schools in the district. Thus every inhabitant of the city of Montpellier was sought to enrich the competitive dialogue given by the three competitors. Multiple debates were held to confront the three different points of view and discuss the values and aims of the presented proposals.

An Echo of the Esplanade

Adriaan Geuze, Director of West 8 and Project Manager, Maarten van de Voorde, are very enthusiastic to work on the landscaping of the Montcalm park. “The 2000 trees form a kind of ‘urban broccoli”, says Adriaan Geuze who projected his vision for the project “the goal is to provide shade for park users in all seasons, and offer different landscapes. ‘The Montcalm park makeover’ will echo the central esplanade of Montpellier and will be accessible to all. It is multifunctional: people can come here to walk, read, relax, play sports, (fitness trail), or work remotely with their laptop or tablet…”