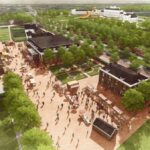 On 8 June 2017, the Dutch Minister Plasterk announced that the consortium Made By Holland is the winning bidder to purchase and redevelop the palace and gardens of Soestdijk, a 17th century Dutch country estate and former residence of the royal family. Soestdijk Palace will become a platform for innovation and excellent entrepreneurship, with exhibitions and events for a wide audience.

West 8 is proud to collaborate on the plan and development strategy with a design for the landscape integration, which involves both restoration of key historical landscape elements as well as additions that support the new identity and programme of the former Royal Dutch estate.