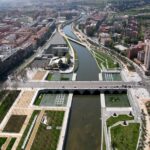 The fomer Mayor of Madrid, Alberto Ruiz-Gallardón had a vistion to bury 23 kilometers of motorway which was segregating the city and created green zones and waterfront parks on top. Madrid RIO is now a famous urban park, very popular and filled with citizens. West 8 made the design in collaboration with the Spanish partners. This project is completed 2 years ago now awarded with the most prestigious award for urban design in USA. Tonight is the award ceremony for the ‘Veronica Rudge Green Prize for Urban Design‘ at Harvard University GSD. The award exhibition is also open for public until 6th of March.

For more informatie please see the official press release and award announcement of 9th of November 2015.